80% of Children Begin Brushing Their Teeth Too Late, Research Shows

Cavities in children’s teeth can be as damaging as they are in adult teeth, and recent studies indicate parents need to play a more active role in ensuring good dental habits, according to a Healthpoint specialist.

Dr Shereena Alhashemi, a Specialist Pediatric Dentist, points to a recent study by the US Centers for Disease Control and Prevention (CDC), which found 80% of children surveyed had started brushing too late, while a significant proportion did not brush often enough, or used too much toothpaste. 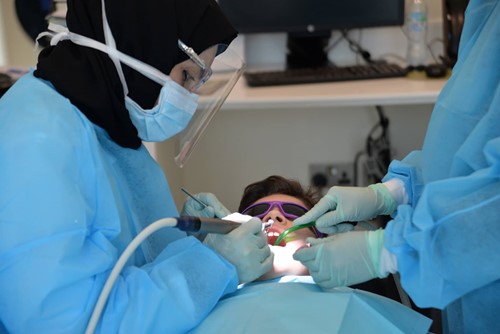 Dr Shereena says, “As soon as your child’s first tooth erupts, as early as six months, you should begin brushing using an infant toothbrush and a smear of baby toothpaste.

“Parents often mistakenly believe that it doesn’t matter if the baby teeth get cavities as they are not permanent teeth. However, the complications of decay in these teeth can be very serious, including abscesses, swelling and puss around the teeth, and chewing problems.”

Dr Shereena says the study also found 33% of children aged three to 15 years brushed their teeth less than the recommended twice a day, which could be harmful to their general health.

“This high figure is worrying, as inadequate brushing can cause bacteria to develop, which can lead to inflammation and disease, not just in the mouth but throughout the body,” she explains.

Dr Shereena says children can be encouraged to brush regularly by making it a fun activity, for example, by letting them choose their own toothbrush featuring their favorite cartoon, playing music while brushing, and helping them brush.

“Once their teeth touch, you can start to floss between them too,” she adds.

“Up until about the age of eight, children must always be supervised while brushing to ensure they are doing it correctly and, more importantly, that they don’t swallow too much toothpaste.”

She adds that the CDC study found 40% of children aged three to six years used too much toothpaste.

“While fluoride is a vital component of oral care, excessive ingestion of it through swallowing can lead to fluorosis, a condition where deposits are left on developing teeth, leading to permanent pits and discoloration.

“Once a child turns two, they should learn to spit while brushing, and you can use an amount of fluoride toothpaste the size of a grain of rice, and from age three to six, a pea-sized amount. Explain to them that they shouldn’t swallow the toothpaste.”

As a final measure to ensure good oral hygiene, Dr. Shereena says parents should take their child to visit a pediatric dentist by their first birthday.