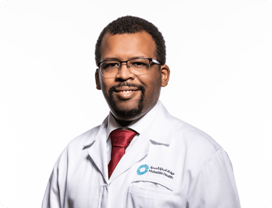 Dr. Ahmed joined Healthpoint in 2022 as a Radiology Consultant, having worked at the Bolton NHS Foundation Trust since 2018. He had also previously received higher musculoskeletal radiology training from Leeds Teaching Hospitals.

Previously, he completed foundation and core surgical training at Yorkshire Deanery, UK, as well as a Certificate of Completion of Training (CCT) in the Hull and East Yorkshire radiology training scheme in 2018.

Dr. Ahmed has seen his work published in various journals and articles. He is a member in several esteemed institutions, including the Royal Colleges of Surgeons, since 2011, British Society of Skeletal Radiology and the British Medical Association. He is also a Fellow of the Royal College of Radiologists, since 2016.