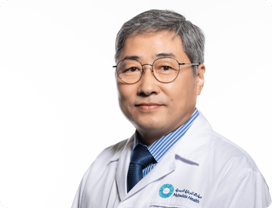 Dr. Shim is a Consultant Neurological Surgeon with over 25 years’ experience in South Korea and the UAE, where he has worked as Medical Director at the Wooridul Spine Centre in Dubai since 2010.

Whilst in South Korea, Dr. Shim was named as Doctor of the Year at Wooridul Spine Hospital on two separate occasions, in 2006 and 2008. He has done presentations on spine surgeries at over 50 international conferences and symposia in Korea, Australia, Europe, and the USA and has been published in the Journal of the Korean Neurosurgery Society, Spine, and Minimally Invasive Surgery.

Member of the 2009 ‘Who’s Who in the World’, a global listing of renowned individuals from various fields, including Nobel Prize winners, academic professionals, and innovators; as well as being listed in the 33rd edition of the ‘American Biographical Institute’s Great Minds of the 21st Century’.