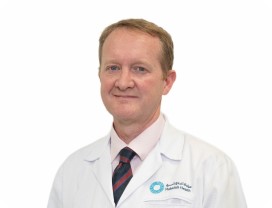 Jon Conroy is an established Orthopaedic Surgeon from the UK. He has vast experience of treating complex Hip and Knee conditions.

He was recruited to Healthpoint Hospital to introduce Mako Robotic Hip and Knee surgery to the region. His experience in Robotic Assisted surgery stretches back 10 years. The first surgeon in England North of London to have a Mako robot he has personally performed around 1,000 robotic cases (the 3rd highest number of surgeries in the UK) before moving to Abu Dhabi in 2022.

Since 2017 he has certified many senior surgeons across the Middle East, Asia and Europe in his role as a Mako instructor. He continues to be actively involved in teaching robotics. He takes international referrals from across the globe.

His subspecialty interests include the treatment of sports conditions of the hip and knee including femeroacetabular impingement (FAI) and labral tears. Minimally invasive, day case joint replacement surgery, revision surgery and second opinions.

He qualified from St Andrews and Manchester University Medical schools in 1995, completed board examinations at the Royal College of Surgeons of England in 2004 (FRCS) and UK Higher Surgical Training (CCST) in 2006.

Jon’s training abroad included Sunnybrook and St Michaels Hospitals through the University of Toronto, Canada under Professors Tile, Schatzker and Waddell. A specialist fellowship in Revision Hip and Knee Surgery at the Prince Charles Hospital in Brisbane Australia, under Professor Crawford and Dr English 2005-2006.

His interest in Mechanical Engineering led to work at the Queensland University of Technology under Professor Crawford in 2005 and completion of a master’s degree in Mechanical Engineering with Distinction at Leeds University in 2005. Subsequently he has been involved in the design of a non-metallic knee replacement, a well-known globally successful hip replacement and instruments for Hip Arthroscopy (Keyhole hip surgery).

Jon has taught many prominent surgeons through his own, Royal College of Surgeons of England approved, Hip Fellowship over a ten-year period.

Clinically he has personally performed over 4,000 joint replacements, hundreds of complex revision joint replacements and over 1,000 hip arthroscopy (keyhole) procedures. These patients have included prominent individuals and professional sports persons.

Academically he has chaired or lectured at many of the prominent meetings in orthopaedics in the UK and around the world. His extensive academic work has been published widely in peer reviewed journals.

Jon has served as a board member of the British Hip Society’s Non-Arthroplasty Hip Registry for several years helping to develop the first of its kind registry in the world for hip related surgery other than joint replacement. This includes Hip Arthroscopy and Peri Acetabular Osteotomy (PAO).

In 2022 he was awarded the position of Adjunct Clinical Professor, Department of Surgery in the College of Medicine and Health Sciences at Khalifa University, Abu Dhabi.

Managerially he was a board member of Harrogate Hospital in the UK for almost 5 years. His role as Head of Surgical Services included Surgical Specialties, Anaesthesia, Paediatrics and Obstetrics and Gynaecology.

Jon is passionate about patient care with a strong emphasis on exploring non operative options before considering a surgical approach. He has a safe and considered approach to new technology making sure he is properly trained and experienced before embarking on new treatments.

Sports injuries of the Hip & Knee including Hip Arthroscopy

Member of the British Orthopaedic Association

Member of the British Hip Society

Member of the International Society of Hip Arthroscopy

Fellow of the Royal College of Surgeons of England 2004

Adjunct Professor in the department of surgery, Khalifa University